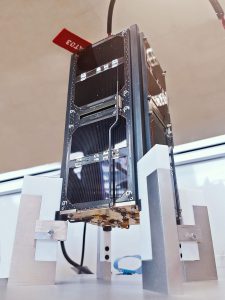 PEGASUS was part of the international project QB50, which has sent in total 36 CubeSat (a.k.a. Nanosatellites), into the Thermosphere. The scientific goal of this mission is to monitor the prevailing conditions in this rather unknown part of Earth’s atmosphere over a period of up to nine months. Each of the nanosatellites within this project was equipped with one of three possible scientific instruments: (i) a set of Langmuir probes, (ii) atomic oxygen measurement device, (iii) ion/neutral mass spectrometer. The satellites were built by CubeSat teams from all over the world and the satellites were launched in two batches. The first batch of 28 satellites was released from the International Space Station in April 2017. The second batch, including PEGASUS, was launched with the Indian PSLV on the 23rd of June in 2017. PEGASUS is the very first 2U CubeSat build and launched by Austria. Under the leadership of the University of Applied Sciences (FHWN), PEGASUS was designed, manufactured and qualified by the FHWN and its research company FOTEC, with its partners the Space Team of the Technical University of Vienna, the Space Tech Group Austria (STG-A) and many others. One of the initial decisions in the PEGASUS project was to design the satellite from scratch instead of relying on procured subsystem. Although this decision caused many delays, at the end, the educational benefit was tremendous and some of the design solutions are unique.

PEGAUSUS is a 2U CubeSat and nearly all subsystems have been designed and built by the PEGASUS team. Beside of a science unit, a multi needle Langmuire probe build by the University of Oslo, PEGASUS has the usual subsystems on board, namely an on-board computer (OBC), an UHF transceiver and two dipole antennas, an electrical power system consisting of a power processing unit, 16 triple junction solar cells (two solar cells always in parallel in combination with a MPPT), and a GPS with a batch antenna. In addition to those systems, PEGASUS also carries a miniaturized Pulsed Plasma Thruster (PPT) on board as a technology verification payload. The summary published at the IAC in Bremen, Germany in 2018 provides a more detailed description of the subsystems and also of some mission results.

The following picture shows the internal components of PEGASUS as well as a view of the outside of the satellite (identical on all sides). 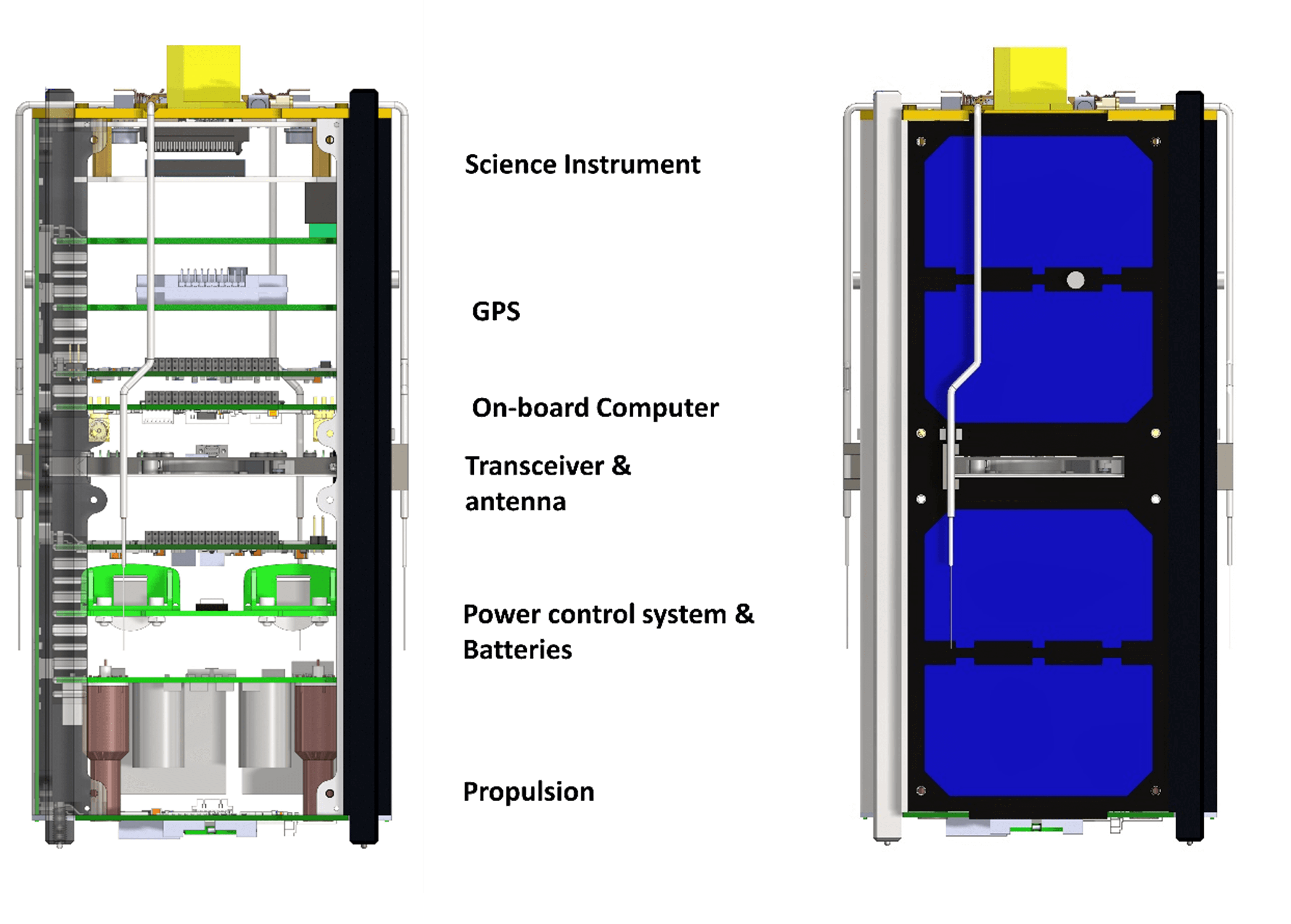 PEGASUS was launched by a PSLV on the 23rd of June, 2017 from the Indian Space Center Satish Dhawan in Sriharikota (see video). The most important step, the deployment of the antennas, took place 30 minutes after the orbit insertion. This activity, which his conducted autonomously by PEGASUS, is one of the most critical ones. Fortunately, everything worked as planned and the first beacon was received only 3 hours after the launch by the ground station network of PEGASUS . Since then, the ground station network established by the Space Technology Group, is continuously receiving data from the Satellite. 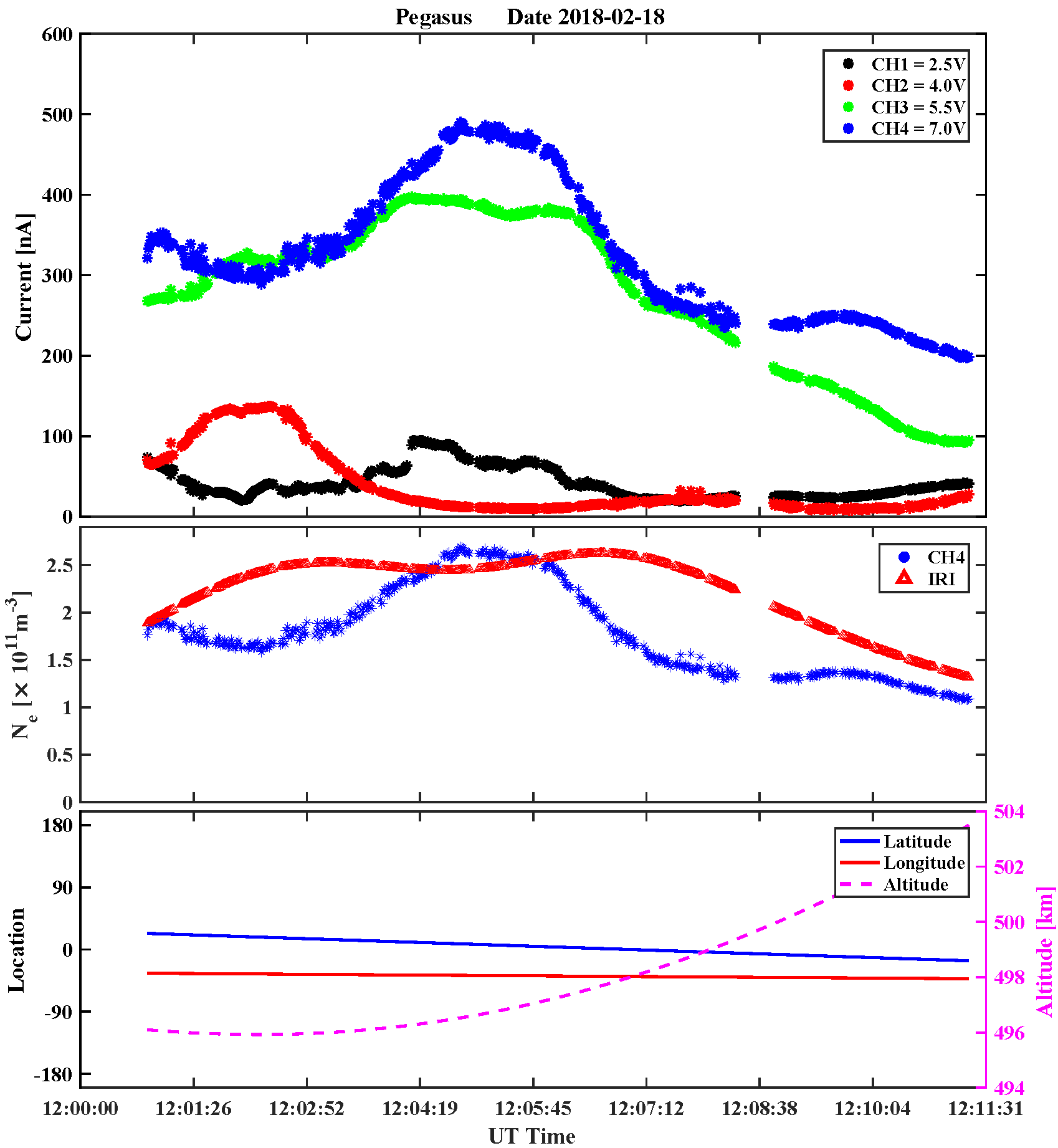 The information contained in the beacons allow a preliminary assessment of the satellites functionality and health. Following the establishment of the communication with the satellite, the downloading of the so-called House Keeping Data (HKD) was initiated. They HKD contain a comprehensive summary of all relevant satellite parameters and subsystem status such as temperatures, voltages, current values, magnetic field measurements, gyration data and many more. In total, the HKD contains 40 parameters with a time resolution of 1 second over the complete mission time. In the first 3 months, all subsystems of the satellite have been commissioned. The following activities were conducted as part of the commissioning phase during those months: • Successful commissioning of the GPS • Successful deployment of the MagBoom (for magnetic field measurement) • Deployment of the Langmuir probes • Activation of the Attitude Determination and Control System and de-tumbling of PEGASUS • Deployment of the four Langmuir probe, commissioning and activation of the Science Unit Since its commissioning, the science unit is generating about 3 Mbit per day. The data is downloaded and forwarded to the experts at the University of Oslo for processing and analysing. The picture shows the result of such an analysis.   At this point (May, 2020), the satellite has operated in space nearly 3 years. Albeit anomalies have been observed in some sensors and in the ADCS, the satellite is still generating and communicating its HKDs. With some luck, PEGASUS will do this for another 3 years or so before it finally re-enters the atmosphere and burns up. For the most recent information about CLIMB click here.